Skip to content
Home > Around the world > Why is the dubai police force assembling a fleet of supercars? 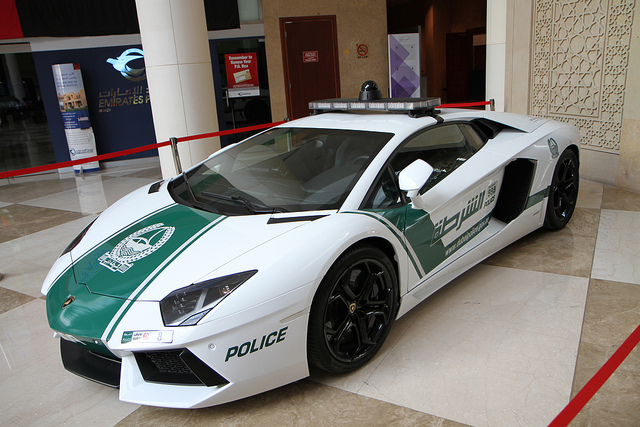 Why is the dubai police force assembling a fleet of supercars?

In Dubai, supercars help keep the streets safe – a fleet of supercars containing everything from a Camaro to a McLaren.

So why is the Dubai police force assembling a fleet of supercars?

The Dubai police force started to assemble its supercharged patrol cars in April last year when it threw some flashing lights and green decals on to a Lamborghini.

So taken was the force by its new addition, it promptly added a Ferrari FF – which, having four seats, would prove to be far more practical than the Lamborghini – as well as a Mercedes Benz SLS AMG (natch).

And it didn’t stop there. Well, no super-fleet would be complete without a Bentley Continental GT, an Aston Martin One-77 and, of course, a Bugatti Veyron.

And, presumably because all that was missing was a bona-fide American muscle car, someone threw in a Chevrolet Camaro somewhere along the line.

Dubai has a problem with speeding and drink-driving, with a road accident-related death being logged every 36 hours. For a population of not much more than two million, that’s a grim statistic – there are around 6 fatalities a day in the UK, but our population is nudging nearly 70 million.

Although the total number of accidents in Dubai actually fell year-on-year during this period, from 2,119 to 2,062, the number of deaths increased by almost two-thirds (65%) from 83 to 127.

Over half (60%) of these accidents were caused by driver mistakes, tailgating, and sudden lane changes –Dubai’s roads range from between one and five lanes of traffic in any one direction – while drink-driving was the cause 201 accidents, in which 56 people were injured and eight killed.

So, a high-powered, high profile police force could act as the perfect deterrent to any miscreant motorists – except the authorities have pointed out these supercars won’t be used for hot pursuits.

Instead, they’ll be used to patrol the tourist areas of the city, such as the Burj Kalifa, Dubai Mall and Jumeirah Beach, and so will be something of a mobile tourist attraction.