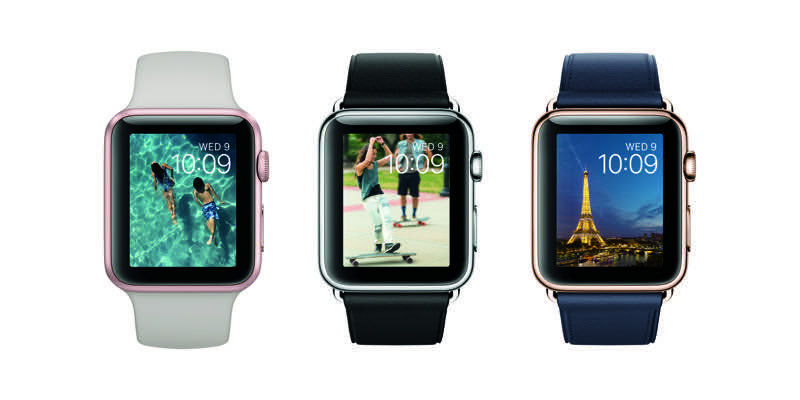 As expected, Apple has announced the iPhone 6 will come in two sizes – both bigger than the 5S – and they’ve also jumped aboard the wearable tech bandwagon with the much-anticipated launch of the Apple Watch.

Note, it’s not an iWatch.

Apple cheif executive, Tim Cook, has declared the iPhone 6 to be “the biggest advancement in the history of iPhone” – which you would expect, really – while Phil Schiller, senior vice president, was a bit more bullish stating the two new iPhones were “the best phones ever made.”

So what can we expect from the iPhone’s latest incarnation?

The iPhone 6 will have a 4.7-inch screen, that’s 0.7-inches larger than the 5S, while the iPhone 6 Plus will bring the iPhone in line with phones like the Samsung Galaxy by having a 5.5-inch screen – the biggest Apple has ever produced.

Both phones will be the slimmest iPhones ever and, like the 5S, will come in three colours – silver, space grey, and gold.

Both phones also come with the promise of a better battery life – which is the least Apple could do given the relatively poor life of previous incarnations.

The phones will come with an iSight camera that uses Focus Pixels for faster auto focus and the 6 Plus will have the added bonus of optical image stabilisation to minimise blur.

The new phones will be the first to come with the iOS8 operating system – featuring HealthKit and HomeKit – as standard, and will also be the first to offer Apple Pay, a contactless mobile payment system that utilises the Apple TouchID to verify identity.

Oh yeah, like it or not, the fingerprint reader is here to stay!

The Apple Watch Sport will be available in polished black or stainless steel, the standard Apple Watch will come in grey or silver anodized aluminium, while the luxury Watch Edition will be released in rose or yellow 18 carat gold, which has been developed to be twice as hard as standard gold.

If you told Apple you’d been to Tenerife, they’d tell you they’d been to Elevenrife!

The watches will also come with interchangeable straps made of synthetic rubber, quilted or plain leather, metal mesh or links.

The watch will come with 11 different faces – from traditional analogue to contemporary sundial, via a dynamic timelapse face, and instead of having a pinch-screen users can zoom in and out using a Digital Crown, which is basically a traditional winder on the side of the watch.

The watch is also backwards compatible as far as the iPhone 5.

No UK prices or launch dates have been released, but the Apple Watch will retail at $349 in the US, where it will be available from early 2015.

What do you think? Are the new Apple products genuinely innovative or more of the same, only moreso?