Skip to content
Home > Small business > Is migration good or bad for the UK economy?

The war of the words

Unfortunately, as with most things in UK politics,  whoever shouts loudest gets the ear of the press and the public, and so just last week we were treated to the spectacle of the leave campaign’s latest attempt to rile the masses into an EU exit.

In arguably the most overtly racist piece of campaigning since Enoch Powell’s ‘Rivers of Blood’ speech, UKIP leader, Nigel Farage, stood proudly in front of a poster that wouldn’t have looked out of place in  a Nazi propaganda piece. 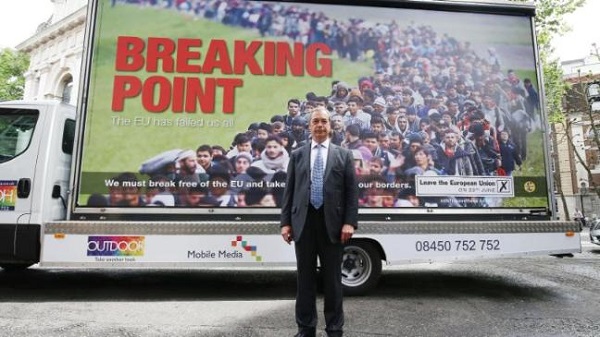 It’s also completely wide of the mark. If anything, the opposite is true…

The case for migration

A new report by the International Longevity Centre – UK (ILC-UK), a futures organisation focussed on some of the biggest challenges facing Government and society, has found that migration could boost the economy by £625 billion (an increase of 11.4%) by 2064-65.

New analysis of Local Authority data found that fears that migrants from the European Economic Area (EEA) are crowding some British citizens out of the labour market are unfounded, as on average those local authorities with higher levels of employment amongst non-UK born citizens also have higher employment rates for the white UK born population.

The report, ‘Immigration: Encourage or Deter?’ describes the challenges posed by the UK’s rapidly ageing population

As the UK’s dependency ratio (the number of people of working age (20-64 years) for each person over 65) declines, tax revenues will fall and public debt as a proportion of GDP will rise. Increased demand for the State Pension and health and social care services from our rapidly ageing population also impact the sustainability of public debt.

The report also notes that while the UK Government has committed itself to raising the State Pension Age beyond 65, this will not stabilise the UK’s declining dependency ratio.

Instead, the report argues that migration could help mitigate the spending pressures a rapidly ageing population create. The report notes that:

Ben Franklin, Head of Economics of Ageing at the ILC-UK said:

“Immigration is no silver bullet. The UK’s ageing population is a dramatic shift that will require a myriad of policies to help achieve desirable outcomes. However, we must recognise the benefits of immigration as a means of coping with the challenge. Migrants are typically of working age, in employment and make a net positive contribution to government finances by contributing more in tax than they take out in benefits”.

“Whether we remain in the EU or not, the UK will have to accept that migrants will play a large role in the future of the labour market, as it does in most other developed economies. As long as the UK has a strong and growing economy, more people will want to come to the UK than to leave it. Since migration helps to support growth and the sustainability of public finances as our society ages, we need not fear it.”

**Dustmann and Frattini (2014) The fiscal effects of immigration to the UK, The Economic Journal3. As defined in the Office for Budget Responsibility’s 2015 Fiscal Sustainability Report