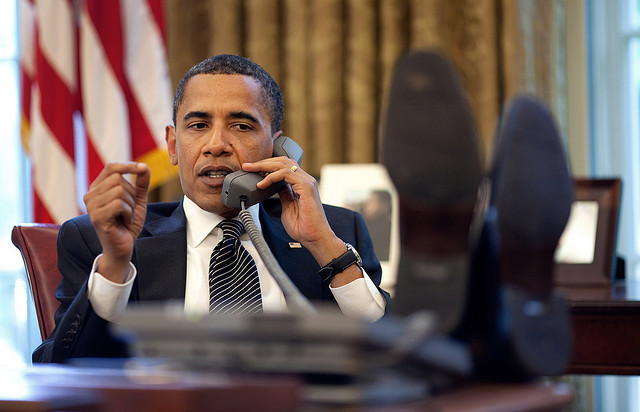 Obama calls for support on Iran via conference call

US president Barack Obama has used a conference call to issue a rallying cry to drum up political support for the Iran nuclear agreement, which will ban the middle eastern nation from arming itself with nuclear weapons.

Obama told the conference call participants: “You guys have to get more active and loud and involved and informed. This is a very good deal that we should be proud of. Iran under this agreement can never get a nuclear weapon.”

Working with the White House

The conference call was arranged by the White House which invited thousands of people representing a large number of groups including members of organizations that have worked with the White House on past issues.

Obama is trying to drum up support in Congress for the controversial agreement which will reduce sanctions on Iran as it gives up the means to make nuclear weapons.

The proposal has been criticised by Republicans who say there is too much wriggle room for Iran and the inspection procedures are so flawed the Iranian authorities could easily cheat their way through them.

And even some of the President’s own party on the House Committee on Foreign Affairs have called the deal ‘simply too dangerous for the American people’.

Calling out the critics

Obama was quick to try and dispel his critics during the conference call, he said: “[critics]  are people who would be opposed to any deal with Iran.”

He also noted that most world leaders support the agreement, not least because it it includes a “rigorous” inspection regime that will catch Iran if it is ever in violation, and suggested that rejecting the deal could lead of military action Iran to prevent it from developing nuclear weapons.

Obama can still veto any disapproval of the deal from Congress, but opposition still remains fierce.