Two-thirds of big UK businesses have been the victim of a cyber attack during the past year, with the majority of attacks involving viruses, malware or spyware, a government study has revealed.

The Cyber Security Breaches Survey also found a quarter of large firms were attacked at least once a month and in some cases cost companies millions of pounds – could your business cope if the hackers came calling?

Could your business fight off a cyber attack?

If you’ve a big business, the chances of becoming the victim of a cyber attack are pretty high – even so, the Cyber Security Breaches Survey found only half of firms have the necessary procedures in place to identify and address any vulnerable areas.

Of even greater concern is that just a third of all firms have formal, written cyber security policies, with 1 in 10 having an incident plan in place.

And so the government is urging all businesses to better protect themselves from the threat of cyber criminals.

“The UK is a world-leading digital economy and this Government has made cyber security a top priority. Too many firms are losing money, data and consumer confidence with the vast number of cyber attacks.

“It’s absolutely crucial businesses are secure and can protect data. As a minimum companies should take action by adopting the Cyber Essentials scheme which will help them protect themselves.”

The government will be investing £1.9billion over the next five to tackle all types of cyber crime.

The survey results were released alongside the Cyber Governance Health Check, which was launched to understand and improve how FTSE 350 companies are managing cyber security risks following last October’s TalkTalk cyber attack which lost the company more than 100,000 and the best part of £60 million.

The Health Check found almost half of the top FTSE 350 businesses regarded cyber attacks as the biggest threat to their business when compared with other key risks, but only a third properly understood the threat of a cyber attack.

Another worrying statistic is that while many businesses are getting better at managing cyber risks, only a fifth have a clear view of the dangers of sharing information with third parties.

The government recommends all firms follow the 10 Steps to Cyber Security, as below… 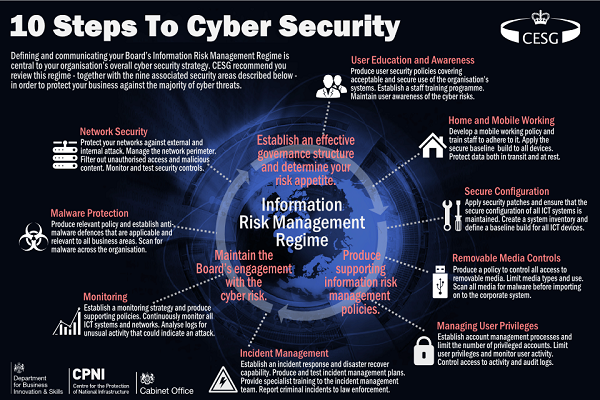 In additon, the government is also creating a new National Cyber Security Centre offering industry a ‘one-stop-shop’ for cyber security support, and the Cyber Essentials scheme is available to all UK firms.