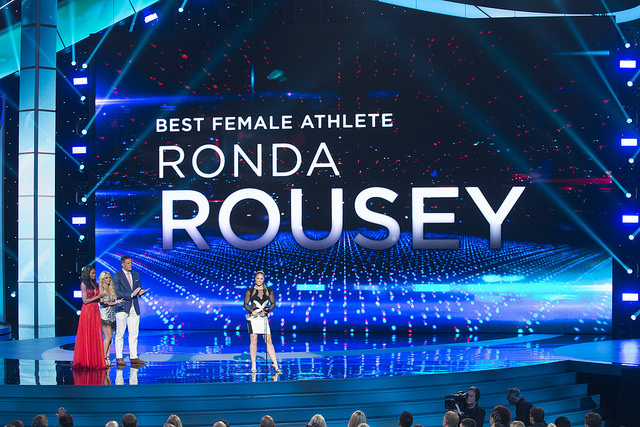 It’s all kicked off following a conference call on the upcoming Ultimate Fighting Championship (UFC) title fight between Ronda Rousey and Holly Holm – but not, as you might expect, inside the octagon.

Ronda Rousey, the current UFC women’s bantamweight champion, is due to defend her title against Holly Holm and was fielding some tough questions on a recent media scrum, some of which were more about confrontations outside the octagon than fights inside it.

The first was about the recent outburst by Rousey’s mother, AnnMaria De Mars , when she launched attack on her coach, Edmond Tarverdyan.

De Mars said of Tarverdyan: ” “I think he hit the lottery when Ronda walked in there. She was winning before she even met him. She probably won 99 percent of the judo matches she ever fought in. She had won the Junior Worlds when she was 17. She got a bronze medal in the Olympics. She got a silver medal in world championships. She was one of the top athletes in the world when she walked in there, and he wouldn’t even give her the time of day for months. Somebody like that is a terrible coach.”

Rousey declined to comment, saying: “I don’t think that’s anybody’s business. Any reaction or response I have to my mother, she’s going to hear it from me, and not a media outlet.”

However, when asked about her relationship with male UFC fighter Travis Browne, Rousey’s line went dead.

And although the UFC PR team said they were trying to get Rousey back on the line, she never came back for the rest of the 40-minute conference call.

And now the rumour mill is in full swing suggesting it wasn’t ‘technical difficulties’ that ended Rousey’s end of the call, but she simply hung up after hearing a question she didn’t want to answer?

The reason a relationship between Rousey and Browne would be controversial is because the fighter is currently under investigation following allegations from his estranged wife, Jenna Renee Web, that she was the victim of domestic abuse.

You can hear the full call here…